Georgia, a country at the intersection of Europe and Asia, is a former Soviet republic that’s home to Caucasus Mountain villages and Black Sea beaches. Capital and largest city of Georgia is known as Tbilisi. Studying MBBS from Georgia has become one of the popular destinations for Indian students. MBBS in Georgia is economical as medical universities have quite affordable fees. In addition, the MBBS degree from Georgia is recognized by Medical Council of India (MCI) and also the World Health Organization (WHO). Admission from Georgian universities is quite easy and involves a very simple process. Tbilisi is considered to be the best place for studying MBBS in Georgia as it has achieved 100% of literacy. Living in Georgia is safe – Georgia is the 4th safest country in the world. There are many MCI approved and WHO recognized universities in Georgia.

Among the various countries, MBBS from Georgia is emerging as one of the top choices for Indian students. Georgia offers world-class MBBS education to students for a surprisingly low tuition fee of 4000$ to 8000$ also counting on the marks scored in NEET in India. However, MBBS in Georgia, offer customary Education at simply reasonable course fees with no entrance test.

Georgia is a member of the Council of Europe, OSCE and Eurocontrol. It is also a part of the European Union’s Free Trade Area since 2014. Georgia has shown a commendable growth from a near-failed state in 2003 to a relatively well-functioning market economy in 2014. Georgia has also been named as the World’s number one economic reformer by the World Bank.

Georgia has successfully achieved 100% of literacy and is considered to be the best place for studying medicine in the world. The medical universities of Georgia are the premium and the best option for any student who wants to study MBBS abroad.

The admission process for studying in Medical college in Georgia is very simple and hassle free. Students are not required to take any entrance test. The admission is done on the basis of the marks obtained in class 12th. After completing your MBBS from Georgia, you can directly apply for a screening test to get license to practice. The Medical universities and colleges in Georgia offer rich quality education with affordable cost as compared to other foreign countries.The facilities and infrastructure provided to the students are world class.

Why MBBS In Georgia?

Georgia has become a hot destination for students from around the world who want to pursue MBBS abroad.

Benefits of MBBS from Georgia 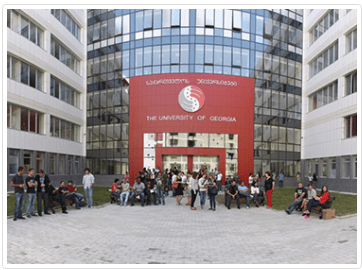 The University of Georgia